This time… the Town Hall fights back! Get ready for Town Hall 12, the first weaponized Town Hall that will shoot back at its attackers!

That has become old now it is Clash of Clans War League October Update 2018. Though the hint was given by Supercell earlier during Livestream at the 6th anniversary. Now they have revealed the next Clash of Clans update! This October, Clans will be able to be a part of an exciting new feature: Clan War Leagues!

What is the Clan War League and how it works?

In other words, if we join it together then it means your Clan will be grouped with seven other Clans into a League. During the course of the League week, you will wage a 15 vs 15 War against each of those Clans. At the end of the week, the Clans with the highest number of Stars will be promoted to the next highest League tier, while the bottom performing Clans will drop down to a lower tier.

How do we enter a War League? It’s easy! The opt-in period will happen once per month, and the War League will take place for eight days after your Clan has opted in. Even though League Wars will be 15 vs 15, there are opportunities to let others wage War during the League week as you can always rotate players in.

There will be 18 League Tiers in total, with plenty of room to strive to be the best. The higher you climb, the greater the rewards are! 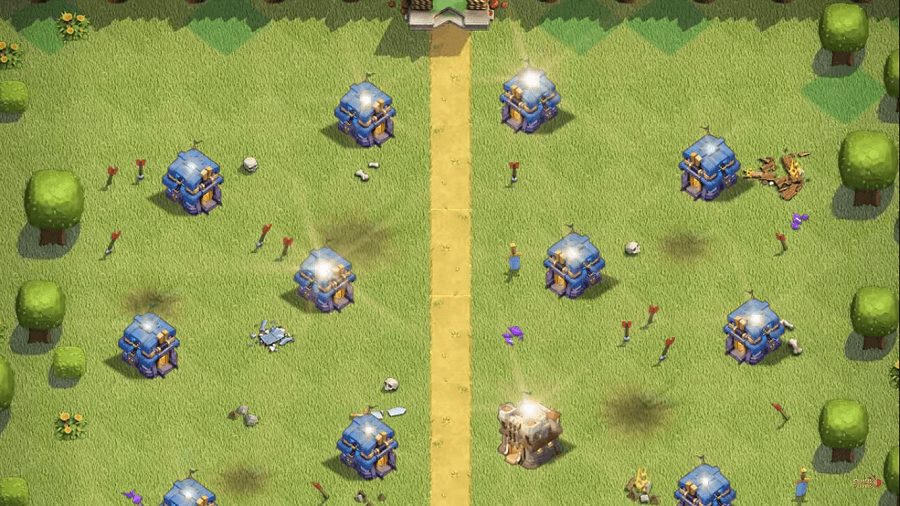 You collect stars during the attacks and at the end of the week, or war league season, all stars that your clan collected are added up to total stars collected during that 7 days.

The 1-2 best clans (depending on the league) will be promoted to a higher league and the bottom 1-2 clans will get demoted to a lower league. Also, the leader can give bonus medals to the 4 members that he thinks deserved it most (himself, most attacks, best attacks, most stars collected etc.)

Q: Will clan wars be possible during Clans War League?
A: No, not if your clan has opted in for League Wars.

Q: Will heroes that are under upgrade be available?
A: For attacking, no but for defense, yes (same as in any war now)

Q: Is this the end of Clan Wars?
A: No, League Wars are once a month only and last for one week only (8 days) Clan Wars are still available outside of League War week.

Q: If my clan does not partake in League Wars, will we then be able to do Clan Wars instead?
A: Clan War is available to those clans that did not join Clan War League.

Q: Who chooses the clan members to be in League Wars?
A: Leader‘s choice

Q: Who gets rewards the clan has earned?
A: All those on the roster
i.e. those selected at CWL sign up, you needn‘t be in a battle to receive rewards, but you need to be in the group from which war participants are assigned from. Also, bonus rewards the clan leader gets to distribute.

Q: Will war weight influence matching? And in what way?
A: Only for your clan‘s very first CWL. For this, the leader picks any number of clan members but a minimum of 15. From these, the heaviest 15 war weights will decide in which of the 18 tiers your clan will start out from. After that, war weight will have no influence in any way, your league opponents will be randomly picked from your tier.

Q: How will the clan member list be sorted when picking players for the roster?
A: Same as it is and has been for CW and FW.

Q: Would losing a war end the current war win streak?
A: No, clan wars and WL are separate game plays so, the wins and losses wouldn’t intermingle.

The Clash Of Clans Town Hall 12 is revealed. It is the time when Supercell has finally rolled out its mega Summer update 2018. This is an exciting time in Clash of Clans as a ton of new content with this release are introduced. It is indeed a dope looking huge building. And here are something else which adds a lot of charm to the Clash of Clans Summer 2018 Update.

Yes, the Giga tesla. By its name, you can easily guess that it is giant and very much offensive defense which comes from the Tesla family. After the mega tesla appearing in the builder hall 8, it is for the 3rd time Supercell has introduced a new huge tesla.

When you upgrade to Town Hall 12, the Town Hall itself is now a defensive structure capable of defending itself. If an opponent so much as scratches the paint, the Giga Tesla will emerge.  The bigger brother of the Tesla family of defenses, the Giga Tesla fires beams of electricity at its attackers, doing lots of damage in retaliation for ruining its pristine paint palate.

The Giga Tesla is attached to the very town hall 12 itself.

As Giga Tesla is attached to Town Hall 12, So there is a chance of defensive troops like Giants attacking the townhall from now on. You didn’t think simply upgrading to Town Hall 12 was the end of your journey, did you? Once you upgrade to Town Hall 12, as we mentioned, you’ll gain access to the Giga Tesla weapon. However, like all defensive structures in Clash of Clans, it can be upgraded.

Yes, the Town Hall weapon CAN be upgraded! The Giga Tesla will have 5 upgrade levels available. Each level increases how many opponents the Giga Tesla can target, up to a maximum of 4.

Once your Giga Tesla is upgraded to its 5th level, you’ll unlock the Giga Tesla’s final ability: the Town Hall itself turns into a massive bomb doing blast damage to surrounding opponents.

From rage-­filled Barbarians with glorious mustaches to pyromaniac wizards, raise your own army and lead your clan to victory! Build your village to fend off raiders and forge a powerful clan with others to destroy enemy clans.

Deliver your Clan Castle reinforcements directly into the heart of your enemy’s base!

You can still choose to deploy your Clan Castle troops normally by pressing the Clan Badge icon and attack the old-fashioned way…or…you can choose to SMASH your way to the Town Hall with a SIEGE MACHINE!

Available at Town Hall 11, the Electro Dragon can soak up a moderate amount of damage and dish out punishment that’ll make enemy villages quiver in fear. Its lightning breath weapon will strike its target and will continue along its path, chain-linking up to 5 different targets. When it receives fatal damage, it releases its stored energy as a final hail of lightning bolts! For more information, the latest news and updates stay tuned to us.