Motorola is preparing for the next smartphone to release which will be Moto m having the model number XT1663. Earlier Moto Razr series became popular and this time, they are trying something new with M series smartphone to make them popular.

Moto M is powered by Octa-core Cortex-A53 with MediaTek MT6750 processor clocked at 1.9GHz combined with GPU Mali-T860MP2 for better graphic performance. It has 3GB RAM and 32GB of internal memory.

It has 5.5″ IPS LCD display having the resolution of 1080 x 1920 pixels. Motorola new smartphone Moto M, sports a 15MP rear camera with LED flash loaded with features like autofocus. While its front camera is of 7MP with features like face detection etc.

Furthermore, it supports faster 4G LTE, other connectivity options and sensors like Bluetooth, gyroscope, accelerometer, GPS, light sensor etc. IPS LCD screen measuring 5.5 inches and a resolution of 1080 x 1920 pixels. With such a measure, the Motorola Moto M feels quite comfortable to grip and too comfortable to the eyes of users.

With the depth of Moto Symbol at the back of smartphone clears that it will have a fingerprint sensor which can be used to unlock the smartphone. 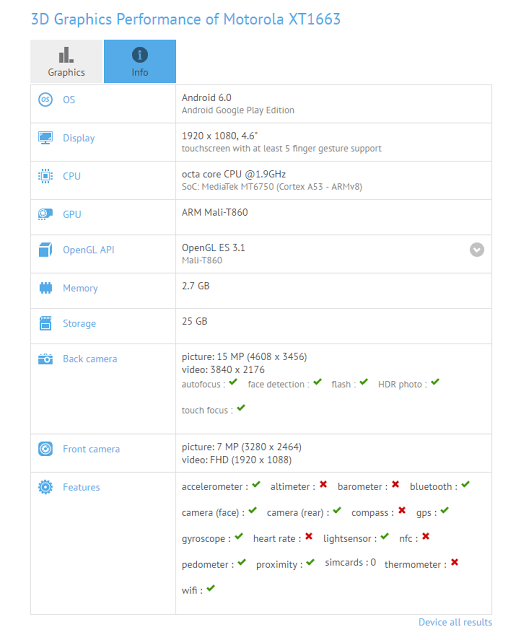 Moto M will be fueled by 3000 mAh non-removable battery. And it runs Android v6.0. According to the reports, it will be launched soon in the upcoming months. More news about the Motorola XT1663 is yet to revealed soon.