Oppo the smartphone brand company has already started teasing the announcement of its next smartphone, which will be called the R9 and R9 Plus. Since last week Oppo has been teasing the Oppo R9 and the R9 Plus camera-focused smartphones in China and posters arrived on Weibo account which were teasing that the smartphones will have VOOC fast charging. 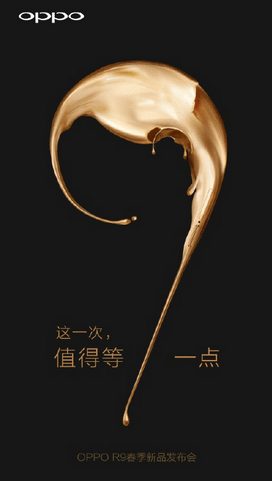 Oppo R9 is a dual sim smartphone 4G LTE support which is having 5.5 inches ful-HD AMOLED display whose resoution is (1080×1920) pixels. It is powered by an octa-core processor clocked at 1.9GHz which is clubbed with 4GB RAM, it is not confirmed yet which processor they are going to use in R9 and according to earlier rumors it was said that it will have Qualcomm Snapdragon 820 which is rejected by the company. So, it is clear that it is not having the Snapdragon 820 as processor in it.

Oppo R9 runs Android 5.1 Lollipop out-of-the-box and is having 32GB inbuilt storage, which can be expanded up to 128GB with the help of a microSD card. As previously said that both the phones will be camera-focused, R9 is having rear camera and front-facing to be of 16MP with features like auto-focus. It will be fueled by the 2850mAh Li-po non-removable battery. The phone will be available in gold color. 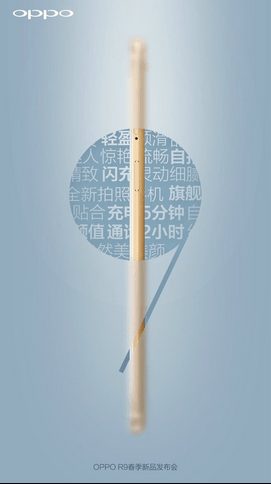 Oppo R9 Plus is a dual-SIM phablet having 6-inch full-HD Amoled display. It is powered by an octa-core processor clocked at 1.8GHz clubbed with 4GB RAM. The R9 and R9 plus are having the same size of RAM and camera specifications. Oppo R9 plus runs Android 5.0 Lollipop out-of-the-box. Both the smartphones are hybrid dual sim which means second sim slot can be used to expand the memory. In R9 Plus memory can be expanded up to 64 GB via microSD card. It is fueled by a bigger battery than Oppo R9 which is 4120mAh non-removable battery. The smartphones will be launching on 17th March 2016 as per the leaks.


Amanhttps://www.fonetimes.com
Aman Bhardwaj is the Founder of FoneTimes who is a technical content writer also. A writer by day and a reader by night, he is a loathe to discuss himself with the third person but can be persuaded to do so from time to time and personally using the Apple iPhone 11 Pro Max.
Share
Facebook
Twitter
Pinterest
WhatsApp