In a major event held in Mumbai, Ricoh India announced the launch of its new handheld 360-Degree camera called Ricoh Theta S. Ricoh Theta S is an improved version or you can say a successor version of Ricoh Theta model name Ricoh Theta M15, a standard model for daily use which captures all corners of your all daily landscape in a single shot having 360 degree view and it was launched two years ago, to be used by the customers worldwide.

Ricoh Theta S will be started to sell in the budget of Rs 39,995  from 14 December onward and will be available offline in different Ricoh dealers stores. You can also pre-book the device by paying the amount of Rs 7,199 from Richoestore. 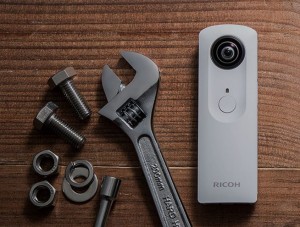 Ricoh Theta S has many improvised features as compared to their old device Ricoh Theta M15. Ricoh Theta S has 12 M CMOS sensor which has equivalent output to pixel count of 14M and having newly developed  wide angle fish eye lenses with F2.0 aperture and it take the shots in high resolution while at the time of video recording it records the video at 3ofps and a feature which enable you to do continuous shooting of 25 Minutes. 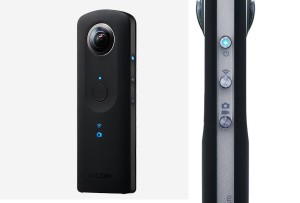 Ricoh Theta S records the data in full HD resolution (Dual fish eye output, when connected by USB) but there can be slight difference in the resolution of spherical videos when the shot is taken in 360 degree. Ricoh Theta S has HD live streaming option which will let you to share the live 360 degree video with the world and you can even adjust the shutter speed of the camera ranging from 1/6400 seconds to 60 seconds. With the Ricoh Theta S, you can upload numerous pictures to theta360.com and share it on social media like Google+, Facebook, Twitter etc. or anywhere you like. 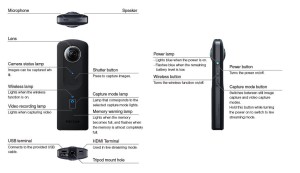 Ricoh Thets S has an internal memory 8GB to store your stuff but if you want to expand the memory then you won’ be able to do that because there is no MicroSD card slot in it and has additional feature which automatically shutdown the device when there is a rise in internal temperature. Ricoh Theta S weight around 125g and it is created by injection molding technique. 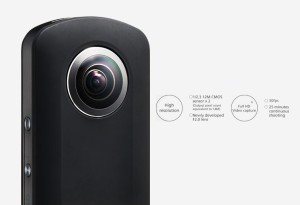 Additional feature of Recoh Theta S is that it is compatible with Google street view which will let you to share and publish your captured images/videos instantly to Google Maps for sharing all over the world. Recoh Theta S has Li-ion battery which you can easily charge via USB cable connected to PC and it will help you to take aprrox 260 photos. Ricoh Theta S has USB 2.0 and HDMI-Micro terminal 1.4