is a smartphone which is in rumors because of its specification and looks. Recently a leaked was arrived on GFXBenchmark which has the details of the upcoming smartphone of Meizu which is Meizu Pro 6.

Meizu Pro 6 features a 4.6-inch Full HD display having the resolution of (1920 x 1080) pixels and comes with at least 5 finger gesture support, also having the pixel density of 375 PPI. It is powered by the latest processor of MediaTek which is Deca-core MT6797T clocked at 2.5 GHz clubbed with 3 GB or 4 GB RAM. It will be having the RAM option, either you can choose the variant with 3 GB RAM or 4 GB RAM variant which will have a bit higher cost. Along with the powerful CPU, it will also have a powerful GPU which is ARM Mali-T880 which will help you during high performance graphic required tasks.

According to the reports, Pro 6 has a 3D Touch Display that is sported on phones like the iPhone 6S/6S Plus. With the help of it you can view the contents of different applications in your smartphone, by just holding the app icon and you don’t require to open the app. It supports 4G LTE  and other connectivity as well which includes Wi-Fi 802.11, b/g/n, Bluetooth 4.0, GPS with A-GPS, GPRS/EDGE, MicroUSB v2.0, etc. 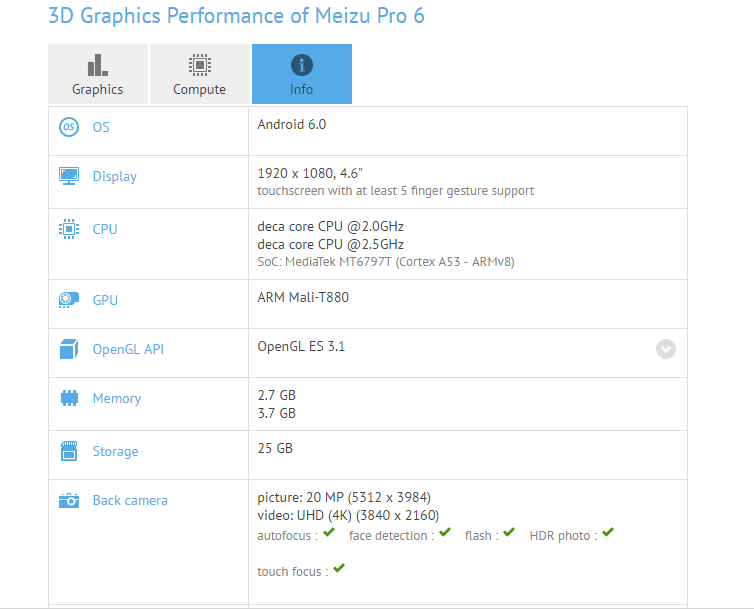 It will sports a 21 MP rear camera with features like auto-focus, face detection and many more while its front facing camera will be of 4.7 MP which is good for capturing selfies and for video calling. It will be having 25 GB internal storage as shown in the above picture but actually it will be 32 GB from which the user will get 25 GB approximately. The storage can also be expanded up to 128 GB via microSD card.

The Pro 6 is having a metallic body which gives the smartphone a premium look. It is single sim smartphone which runs Android 6.0 Marshmallow out-of-the-box. It will be fueled by the massive size 3150mAh Li-Ion battery which is non-removable. Meizu Pro 6 will be available in two color variants namely black and silver.

For more information and latest news stay tuned with us 🙂

Gionee P7 Max having 3GB RAM is Launched in India